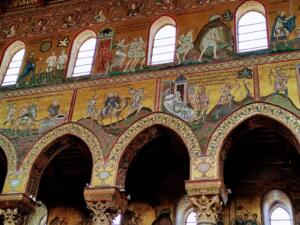 A 2 hour guided tour that includes the visit of the Cathedral and the Cloister.

Monreale, 7km from the center of Palermo is located at the foot of Mount Caputo, about 20 minutes by car.

Monreale was chosen by William II, the last Norman king, to build the monumental complex of which only the Basilica and the Cloister remain.

The wonderful Cathedral was built in 1172 and concludes the history of Norman architecture in Sicily. Grandiose in its size and perfect in its spatial harmony, the triumph of gold and light will leave you breathless. Byzantine and Venetian mosaicists, Islamic and local craftsmen decorated the walls with shining mosaics that narrate the events of the Old and New Testaments.

Shortly after William II ordered the construction of a Monastery intended to house the Benedictine monks who had custody of the Christian Temple. Visiting the Cloister, which is an integral part of the ancient Monastery is an experience you won’t forget. It will give you unique moments, the magic of a place of rare beauty, where even today you can breathe an air of deep spirituality. It has the shape of a perfect square, enriched by elegant columns, embellished with capitals, all richly carved. Your gaze will be lost among the many images represented in them, a rich documentation of medieval sculpture. 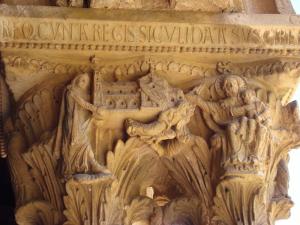 A guided tour of about 3 hours that will lead you to discover the magnificent Cathedral of Monreale and its splendid Cloister, and the Catacombs of the Capuchins.

Visiting the Catacombs of the Capuchins is an experience with a strong impact but at the same time full of charm. The visit takes place in an ancient underground cemetery that houses thousands of mummies, wearing the original clothes, dating from a period between the end of the sixteenth century and the beginning of the twentieth century. The Catacombs of the Capuchins of Palermo, a place that attracted and fascinated poets and writers, is also an interesting historical document of fashion of the time. 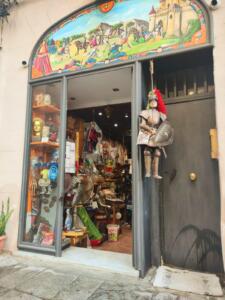 Tired of monuments and churches? Would you like to visit Palermo in a more original way? Then this tour is for you!

Walking around the historic city centre of Palermo, the Traditions and Crafts Tour will show you some of the ancient local crafts that still survive. You will discover another important but often overlooked facet of what the people of Palermo are proud of: their craftsmanship.

In the historic Loggia district, you will be welcomed by a silversmith who learned his craft some 60 years ago and still works here. You will be astonished at how practised hands can produce elaborate and unique pieces mixing old and new techniques.

History and legend are fused in the ‘Opera dei Pupi’, the traditional Sicilian puppet theatre. A family of master puppeteers, established in 1893, has agreed to share a few secrets about making their beautiful artisanal puppets, inspired by Frankish romantic poems. Depending on the size of the group, there’s a chance to visit the workshop or hear the detailed stories behind this particularly Sicilian entertainment.

Not far from where the old Kemonia river used to run, you will be welcomed into the workshop of one of the last chair repairers in Palermo. The owner will show you around what used to be both his home and shop and will tell you some anecdotes about this ancient and now dying craft.

You can’t say you have been to Sicily if you don’t know what a ‘coppola’ is! In the old hat-makers street, a master in the craft of headwear has agreed to open his doors and show you his creations. You will discover the ancient crafts used and the different stages behind making the coppola, the famous handmade Sicilian hat.

This Traditions and Crafts walking tour lasts about 3 hours, is for small groups only and is on request. It takes place in the mornings, Monday to Friday only. 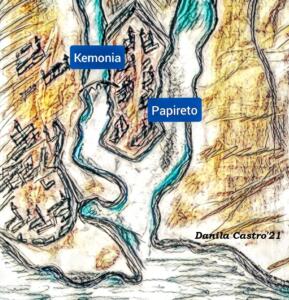 3 hour walking tour of Palermo historic center will let us retrace the tracks of the ancient Kemonia torrent and Papireto river. Old Town is the original Phoenician settlement located on a peninsula bounded by two rivers, Kemonia and Papireto. After numerous and violent floods caused especially by the Kemonia river, the City Senate finally regulated the streams and they were dried out in the late sixteenth century. The Kemonia torrent also known as “river of bad weather” flowed southwest of the old Palermo. After receiving several tributaries, continued its path through Via Porta di Castro, Ballarò and Albergheria, Piazza del Ponticello (little bridge), named after the “little bridge” that in the past connected the two sides of the river. The Papireto River flowed northwest of the ancient town and developed through depressions as long as it met the sea. We will walk through Via Venezia (the ancient Conceria district), and tracing the tracks of the Papireto River we will get Via Papireto and the flee market. 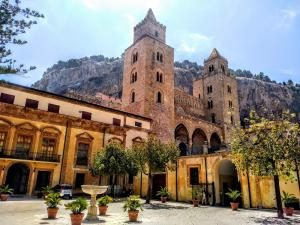 A full or half day tour to discover the fascinating Cefalù. Located about 70 km from Palermo, in addition to the artistic and cultural interest of its historic center, Cefalù is famous for being a seaside resort on the Tyrrhenian Sea that stands out thanks to the golden sandy beach and crystal clear sea. The historic center, dominated by the Cathedral, a wonderful building of the Norman era, should be explored exclusively on foot getting lost in the countless streets, an exciting experience and full of surprises. The tour includes a guided tour of the Cathedral and the medieval wash house, free time for shopping or a walk on the beach. 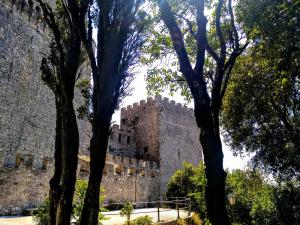 A full-day tour dedicated to the beautiful town of Erice. A little more than 100 km from Palermo, in the province of Trapani, a visit to the charming medieval village that stands on the homonymous mountain at about 750 meters above sea level. A walk through the winding streets of its center where time seems to have stopped. History, myths but above all unforgettable views of the Salt Pans of Trapani and the Egadi Islands will make the tour an unforgettable experience.